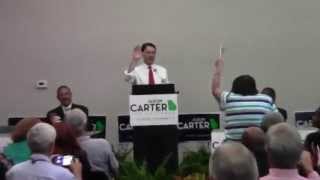 Jason Carter wants you to go vote, for him for Governor. You can come meet him today at 5PM in Valdosta.

When Jason Carter spoke October 12th in Albany, Georgia, early voting was just starting. Now that’s finished, and Election Day is Tuesday, November 4th. If you haven’t voted yet, Tuesday’s the time to take all your friends and neighbors and go vote for Jason Carter for Governor of Georgia and for all the other Democratic local, state, and national candidates. END_OF_DOCUMENT_TOKEN_TO_BE_REPLACED

Jason Carter will be meeting and greeting: 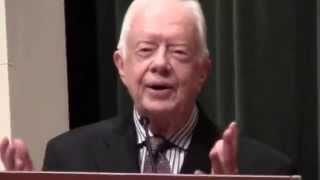 Georgia going backwards for the past ten years. After we had so many gains in our state.

In fact in 2000 Georgia was on the verge of becoming the kind of state we all could be proud of. Moving into END_OF_DOCUMENT_TOKEN_TO_BE_REPLACED

Former First Lady Rosalynn Carter did something she’s never done before so she could come encourage you to vote: she left a Habitat build early to come speak at the Lowndes County Courthouse last Thursday. Now you can vote for Jason Carter for Governor and the rest of the Democratic slate starting Monday October 13th.

Carter has been in the Dallas/Fort Worth area this week, participating in the 31st Annual Jimmy & Rosalynn Carter Work Project, an annual week-long home building project organized by Habitat for Humanity, a project that has occurred in a wide variety of locations around the world since 1986, such as Chicago, India, the Philippines, New York, Watts in Los Angeles, and Valdosta.

For the first time ever, the former first lady left the project early, so she could campaign for Jason.

Here are videos of Jason Carter and the other Democratic candidates who came to the Annual Lowndes County Democratic Party Barbecue July 1st 2014.

Valarie Wilson has a runoff Tuesday for Georgia School Superintendent (the other candidate was invited but did not attend). In November, Democrats can vote for Bikram Mohanty for Georgia State Senate District 8, Dexter Sharper for Georgia House District 177 (unopposed incumbent), Daniel Blackman for Public Service Commission, Robbin Shipp for Labor Commissioner, and of course Jason Carter for Governor.

Here are links to the videos, followed by a playlist. END_OF_DOCUMENT_TOKEN_TO_BE_REPLACED