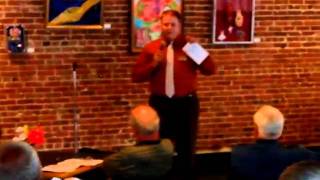 About the Lowndes County Democratic Party

END_OF_DOCUMENT_TOKEN_TO_BE_REPLACED

Democrats have a good chance to win in Georgia’s Sixth Congressional District special election which is tomorrow, April 18, 2017. You can volunteer to phone bank through this DPG web page.

Here’s one version of why: END_OF_DOCUMENT_TOKEN_TO_BE_REPLACED

On March 27, 2017, the Lowndes County Democratic Committee (LCDC) approved a new resolution against Sabal Trail methane pipeline and for solar power, going beyond the old ones it passed in March 2014, this time calling for financial divestment from companies that support the pipeline, including calling on local and state elected officials to divest and not to accept any campaign finance funds from the same. The new LCDC resolution includes a quote agreeing that Sabal Trail is a threat to our drinking water in the Florida Aquifer, from a resolution of February 2017 by the Orange County, Florida Democratic Executive Committee (DEC); several other Florida county DECs have since also passed such resolutions.

The LCDC WHEREASes cite economics, damage Sabal Trail has already caused to our environment including Withlacoochee River, eminent domain for private company is not equal justice under the law, public safety and welfare, the lack of need for the pipeline now that Florida Power and Light has admitted Florida needs no new electricity until 2024, the economic victory of solar power, Floridians’ vote last year for solar power, and education, since Sabal Trail goes barely a mile from Clyattville Elementary School in Lowndes County.

This resolution will be discussed 6PM tonight at the Lowndes County Democratic Party (LCDP) at Mama Junes restaurant in Valdosta, along with new signs to Support Our Teachers.

The full text of the new LCDP resolution, entitled “A Resolution Against the Sabal Trail methane pipeline and For Solar Power”, is on the LCDP website in PDF. The resolution concludes: END_OF_DOCUMENT_TOKEN_TO_BE_REPLACED

The Lowndes County Democratic Committee (LCDC) met at the end of March and voted to approve our project “Thank Our Teachers”. The final teacher graphic (not the one shown below) will be distributed Monday and LCDP members will be asked to get it out to the community.

The LCDC (essentially the board of directors for the LCDP) also formalized subcommittees on Education, Environment, Public Relations, and Finance. Please come, get involved on one of these subcommittees and make a difference in our community.

And the LCDC approved a new resolution; a press release on that will go out Monday.

About the Lowndes County Democratic Party