A judge in Leesburg, GA is considering Sabal Trail’s demand for Georgia eminent domain and a Mitchell County landowner family’s countersuit for criminal trespass. LCDP Chair Tom Hochschild filed the LCDC resolution against the Sabal Trail fracked methane pipeline as an Amicus curiae, including GA State Rep. Dexter Sharper’s letter against the pipeline (PDF). Other Amicus briefs were filed by SpectraBusters, WWALS Watershed Coalition, and Students Against Violating the Environment. There’s no need for this destructive and hazardous pipeline that threatens our water, or lands, our schools, and our economy.

IN THE SUPERIOR COURT OF LEE COUNTY

IN SUPPORT OF DEFENDANTS THE BELLS 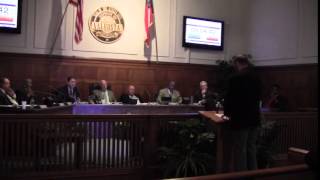 COMES NOW LOWNDES COUNTY DEMOCRATIC PARTY (LCDP), as friends of the court and concerned citizens in the above-entitled action in support of the Defendants and file this their brief with the court in the above referenced case and states as follows and provides in support thereof the following:

STATEMENT OF INTEREST OF AMICUS CURIAE

The Lowndes County Democratic Party (LCDP) is an intervenor with FERC against the same pipeline Sabal Trail proposes to continue southeastward from the Bell’s property in Mitchell County, drilling under the Withlacoochee River into Lowndes County, crossing through wetlands, farms, and forests, and near a school, all above the same Floridan Aquifer as in Mitchell County. The Lowndes County Democratic Committee (LCDC), which is the LCDP ruling body, voted March 1, 2014 to oppose the Sabal Trail pipeline, announced that decision in the press release attached hereto as Exhibit A, and the LCDP Chair at the time read that statement to the Federal Energy Regulatory Commission (FERC) at its Scoping Meeting in Valdosta, Lowndes County, Georgia on March 4, 2014. LCDP filed that LCDP statement again plus supporting information with FERC 12 December 2014 in a motion to intervene against Sabal Trail in FERC Docket CP15-17, attached hereto as Exhibit B.

In addition, Dexter Sharper, who represents Valdosta and parts of Lowndes County in the Georgia House of Representatives, District 177, filed a letter with FERC January 7, 2015 citing that LCDC decision and other reasons he opposes the Sabal Trail pipeline, which are summarized in the ARGUMENT below. Rep. Sharper’s letter is attached hereto as Exhibit C.

Any decision of the court in Leesburg about the subject property in Mitchell County will affect Lowndes County, because it will either promote or impede the progress of the Sabal Trail pipeline, which Sabal Trail proposes to run through Lowndes County. LCDP is opposed to that pipeline for the reasons of environmental, property rights, and safety detailed in Exhibit A.

In addition, as Rep. Sharper detailed in the letter in Exhibit C:

For the reasons stated above, Amicus respectfully asks the court to hold that Sabal Trail can not use Georgia eminent domain and that entry by Sabal Trail onto any landowner’s property without permission is trespass.

Georgia Democrats believe we have a moral obligation to leave our
children and grandchildren with an earth as safe, beautiful, and
majestic as the one bequeathed to us by our parents and grandparents.

The Sabal Trail Pipeline is proposed to move Liquid Natural Gas
(LNG) from fracking sites to Florida. Fracking is a known polluting
technique, leaving behind undrinkable water and unusable earth.
Florida is the Sunshine State and could generate any needed electricity
from less expensive and more environmentally friendly renewable
sources of solar and wind.

Georgia Democrats believe in and uphold every citizen’s right to
equal and impartial justice under the law.

The taking of privately owned property by a private company is a
property rights issue. Putting corporations above citizens is not
equal, nor is it impartial. Lowndes County property owners have a
right to say who can and cannot use their property and a LNG pipeline
that benefits no Georgians is a property rights violation.

Existing pipelines have a history of failures from poor monitoring
and maintenance which have resulted in explosions, fires and deaths.
The safety of Lowndes County citizens should be a top priority of
our local and state governments.

The Committee urges citizens to attend the Federal Energy Regulatory
Commission meeting on Tuesday, March 4th at 6:00pm at the Holiday
Inn at 1805 West Hill Avenue Valdosta, GA 31601 and express their
opposition to this pipeline.

The Lowndes County Democratic Party promotes development of Party
organization and activities, seeks and encourages qualified candidates
for public office, supports Democratic nominees, performs such
election functions as are required by law, maintains appropriate
records, promotes and adds logistical support to the State Affirmative
Action program, and raises funds for the above purposes.

My name is Thomas R. Hochschild and I am submitting this motion to intervene on Sabal Trail Transmission, LLC’s proposed pipeline (Docket CP 15-17-000) on behalf of the Lowndes County Democratic Party (LCDP) as its Chairman.

On March 1, 2014 the Lowndes County Democratic Committee voted to oppose the Sabal Trail Transmission LLC’s proposed pipeline. We proclaim our opposition for the following reasons:

Thank you for your consideration.

I am writing as the Georgia State House Representative for District 177 on behalf of my constituents to express my concerns regarding Sabal Trail Transmission’s (SST) proposed natural gas pipeline through my district in south Georgia. More specifically I have the following concerns:

This is an unacceptable hazard, especially considering the 2009 Florida Gas Transmission pipeline incident in which a much smaller 18-inch pipeline blew up between I-95 and the Florida Turnpike and threw a 104-foot pipe segment across the Turnpike, which could have hit a nearby high school. See National Transportation Safety Board Pipeline Accident Brief for Accident No. DCA09FP007.

All Hamilton County’s concerns about the Withlacoochee River in Florida apply equally to the same Withlacoochee River in Lowndes County, Georgia. See also the 15 November 2014 FERC filing of opposition from WWALS Watershed Coalition Inc., which includes a copy of the Georgia Water Coalition Dirty Dozen 2014 Item Number 9, opposing the Sabal Trail pipeline anywhere in Georgia, plus corrosion issues in our acidic soil and water, and the WWALS motion to intervene of 16 December 2014, which adds further material.

Southern Natural Gas has filed a motion to intervene 16 December 2014, including similar comments.

“WHEREAS, the City of Valdosta has concerns regarding any potential effect the proposed pipeline or its construction might have on the Floridan aquifer, the primary source of the drinking water supply for our City, County and the south Georgia area; and”

“Georgia Democrats believe we have a moral obligation to leave our children and grandchildren with an earth as safe, beautiful, and majestic as the one bequeathed to us by our parents and grandparents.”

For all these reasons, on behalf of my constituents and the citizens of Lowndes County and the state of Georgia, I oppose the Sabal Trail pipeline anywhere in the County of Lowndes or the State of Georgia.

I urge that FERC reject any permit for the Sabal Trail pipeline, or at the very least move it entirely out of the State of Georgia.

I would like to thank you for your consideration and would appreciate receiving a written response to the concerns I have raised.

One thought on “No need for Sabal Trail pipeline or its threats –LCDP to Judge in Leesburg, GA”